Over thousands of years, Indigenous peoples have developed an intimate relationship with their ancestral  lands and ecosystems in which they live and that form their territories. They have established distinct systems of knowledge, innovation and practices relating to the cultivation and protection of these lands and their biodiversity. Sacred natural sites are embedded on their territories, as places of cultural, ecological and spiritual significance. The rituals and ceremonies associated with these sites underpin their traditional customary laws and traditional governance systems. 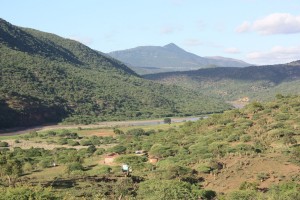 Since colonisation, the  now dominant industrial paradigm has marginalised, disrespected and undermined Africa’s rich cultural heritage. Communities and their lands have been fragmented and displaced. This has given rise to poverty and growing economic and food insecurity – phenomena unknown prior to colonisation.  Sacred natural sites and the sacred lands in which they are embedded, have become vulnerable, degraded and increasingly threatened by the various forms of landgrabbing, from tourism to mining and plantations.

EarthLore actively supports communities wanting to protect or restore their sacred natural sites and sacred lands. We accompany communities on a journey of revival of their traditional knowledge and practices and thereby their traditional governance systems. In this process, through ongoing dialogues with knowledgeable elders, they are able restore their sacred sites and the associated ceremonies. These require the diversity of seeds to be revived, as well as their traditional farming systems, in order to have the required sacred seeds for the ceremonies. The role of women is usually central in the ceremonies because they are responsible for the seeds within these ceremonies. In this way the culture is woven back to life, together with the sacred lands of their ancestors.

EarthLore, formerly Mupo Foundation, worked with communities in Venda, Limpopo, South Africa, for several years, to restore and protect their network of sacred sites and clan governance systems. They formed a community based organisation called Dzomo La Mupo, Voice of the Earth, whose members are the custodian clans of sacred natural sites. Today they continue this work as an independent organisation. Here is their story.

During 2012, we completed a groundbreaking piece of work that contributed towards the registration of three Sacred Natural Sites, known as Zwifho in Venda, as part of a network of sites.  The resulting document is entitled Application to South African Heritage Resources Agency to recognize a Network of Sacred Natural Sites, Zwifho, as National Heritage Sites in South Africa.

In the process, we supported three Venda clans to document their customary laws and clan governance structures and prepare application dossiers to formally register three sacred community forests with the South African Heritage Resources Agency (SAHRA). The documents include the Venda Indigenous Laws of Origin for Governing Sacred Natural Sites, maps, profiles, Clan Constitutions, a glossary of local terms and other supporting documents. Registration would provide a higher level of protection from development projects and would firmly establish the customary rights of the local communities over each of these sacred natural sites.

With support from our legal advisors, after the submission of the applications, we, alongside the community organisation Dzomo La Mupo, attended various meetings with the government body, SAHRA. The SAHRA delegates said they were highly impressed by the quality of the applications and proposed that the registration be up-scaled from provincial to national heritage site.

We also commenced registration of Venda’s network of Sacred Natural Sites with the World Conservation Monitoring Centre as an Indigenous and Community Conservation Area (ICCA). This is the first of two phases of formal registration as an ICCA.

EarthLore, formerly Mupo Foundation, supported a legal battle that saved the sacred Phiphide Waterfall in Venda from a destructive, illegal tourism development. This court case also set the foundation for registering the protection of the network of sacred sites under national and international laws.

Sacred Voices features Venda Makhadzi elder women  custodians along with other Sacred Natural Sites custodians and records their messages to the world. The film was showcased at the IUCN Congress in 2012. It has been viewed widely and has been influential in gaining international support for a movement to demand No-Go areas for Sacred Natural Sites and Indigenous territories.